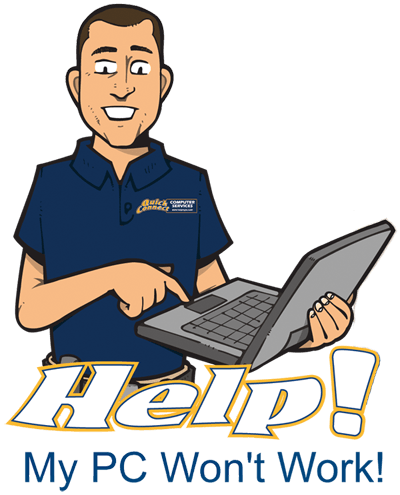 The recent storms have caused several customers to have issues caused by recent power outages.  It is the beginning of storm season, so it is the perfect time to talk about power issues and computers.

There are two types of power issues when it comes to computers: Power surge and power loss. A computer requires a particular amount of power (voltage), no more no less.  A power surge is a sudden and usually short increase in power (voltage), also called a spike. When a computer gets a surge in power, damage can occur, possibly, to the power supply, this is the part of the computer that changes AC power into DC.  Typically once this is replaced the computer will work again but not always.  If the surge gets deeper into the computer, issues to other components can occur.

Lightning can cause power surges but is not predictable in the way that it can damage your electronics.  Sometimes it won’t damage a thing, other times it will completely fry every component in your computer.  Additionally, it can enter your computer via any cable or cord going to your computer from outside the house.  For example your high-speed cable modem or phone lines.

A power outage or brownout is the opposite of a power surge.   A brownout is an intentional or unintentional drop in voltage in an electrical power supply system. Sudden loss of power can be equally dangerous for your computer, causing file corruption, failure to boot, and it can even cause corruption to your entire hard drive to the point that your data is nonrecoverable in a worse case.

How to Protect Your Computer

Better Protection for your Computer & Data

Most people use surge protectors, but not all surge protectors are created equal.  Most people don’t realize that surge protectors wear out over time even if they are not hit by power surges.  They should be replaced every few years.  Also, purchase one that includes an insurance policy, so that if your equipment is damaged while connected to the surge protector, they will reimburse yours for repairs or replacement.  Quite often though homeowners insurance and renters insurance has a clause for this protection.  A professional will have to attest to the damage before they will pay out and your deductible may be high enough that a repair is not covered.

If you have a good surge protector, then turning your computer off before an approaching storm protects you from both power surges and power loss. But you can’t always anticipate a loss of power.

Best Protection for your Computer & Data

For the best protection, use a UPS (Uninterruptable Power Supply), also known as a battery backup system.

When installed properly, a UPS protects your computer from lightning and power outages. A UPS has superior surge protection and when there is a loss of power, the battery kicks in to run your computer allowing time for the computer to shut down safely.  The biggest mistake people make with these systems is they do not install the software and connection cord that allows your UPS to turn off your computer when battery reserves are low.  One common software for this is called Power Chute for example.

To add another layer to this, houses and offices can even have whole house surge protection installed.  Those devices are rather inexpensive so we would say why not if you want every layer of protection you can get.

Make sure you have a good surge protector and backup system. If you don’t, give us a call. Quick Connect can HELP!